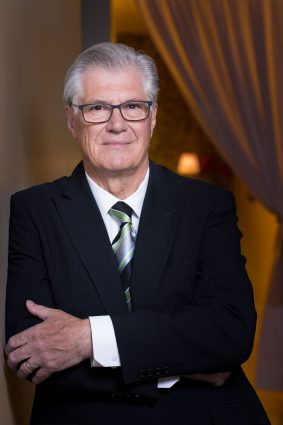 In 1971, a tall, lanky, young man walked into Green Acres Funeral Home in the francophone community of St. Boniface, Manitoba looking for a job. When he was hired as an apprentice, he couldn’t believe his luck.  As an apprentice he would not only have a job, but he would learn a trade.

During the first two years of his apprenticeship, Denis completed a rigid program which included studies at the University of Saskatchewan, qualifying him as a licensed embalmer.  Two more years later, Denis graduated as a licensed Funeral Director. His career was launched. He had embarked on a career that brought him great fulfillment but, at the time, he could never have imagined it would span the next 50 years.

“In those days, funerals were strictly controlled by religion and traditional expectations. Protocols were followed with no room for exceptions. It was a male dominated industry. Funeral directors, priests, ministers, all males. It was very physical transferring the deceased from their place of death, sometimes in the middle of the night, carrying caskets from the funeral home to the hearse to the church to the cemetery.” reminisced Denis lately as he thought back to the early years.

Denis was a compassionate young man who had boundless curiosity and drive. Never one to remain complacent, Denis continued his education which ultimately became a lifelong passion for learning. He studied at the University of Manitoba, St. Boniface University and later studied Project Management at McGill.  He read veraciously, newspapers, magazines, books. He became a computer wizard keeping up with the fast-paced ever-present changes in the IT world. He never stood still; he is always searching for answers to his endless questions.

And, physically, Denis had energy to burn. Playing sports was his outlet, with his favorite choice, a great choice given his height, basketball. It was not uncommon to see Denis out on the court with his pals playing in a highly competitive senior league. Pals that to this day are only too happy to hang out with Denis when he visits St. Boniface.

Denis worked for 24 years in St. Boniface. For 20 of those years he worked at Desjardins Funeral Chapel. His initial employer, as Denis describes him, was the quintessential dignified Funeral Director who taught Denis the importance of community involvement, of not taking oneself too seriously and to never lose one’s sense of humour.

Denis continued to rise through the ranks and became a manager in 1984. It was during that time; he became involved in community work. He became President of the Manitoba Hospice Foundation, member of the Chamber of Commerce, President of St. Timothy’s parish council, a toastmaster, Cub and Scout leader, and a coach not to mention a few.

Denis married and became a proud father of a son and daughter. At home, he admits that his career was difficult for the family, it being a 24/7 on-call profession. One never knows when one might get a call late at night or early dawn, or on special holidays such as Christmas and Easter. But, with his “can-do” easy-going temperament, he, along with his family, made it work.

“I have my family to thank for always supporting me and never complaining about the hours that I worked.  You could say that they played an important role in my success.” Denis recently proudly pointed out.

As was his way, in the early 90’s, Denis started to become restless. He questioned his future. He wanted a change, a challenge.  In 1995 he was offered the opportunity to take over funeral operations in the West Island of Montreal. After a great deal of soul searching, he accepted and moved to Quebec. It was to be a move that altered the direction of his life. He knew change in his industry was on the horizon and he wanted to play an integral part in introducing and carrying out those changes.  He eagerly embraced this new challenge and his new home.

Upon his arrival, he met a young, forward-thinking Funeral Director, Stéphanie Côté. They joined forces and together implemented modifications that better suited the wishes and desires of the families that they served. Religion, although important, was not always the principle driver of the funeral ceremony. Families had needs, wishes. They wanted to remember and celebrate their loved ones in unique ways. It was the beginning of a new era in funeral services.

It didn’t take long for Denis to become completely smitten with Stéphanie. They soon became a couple, married, and had two beautiful, energetic daughters. You could say that the power couple became a power family!

Denis also brought his passion for community work to the West Island. He sat as President of the West Island Palliative Care Residence working closely for seven years with the late Teresa Dellar. During his tenure he saw the grand opening of the residence and participated in several strategic planning sessions.  The residence remains one of the leading palliative care residences in the world.

He sat on the BNQ committee playing an important role in creating standards in Funeral Services.  These standards are the basis for the improvement in funeral services in many firms and continues to provide the framework for the future of the industry.

Denis has boundless curiosity and interest in people. He knows how to draw out a person’s thoughts and feelings especially during their time of grief. This gift was never so apparent as when Denis became a bereavement facilitator for a men’s group in the West Island.

It was one of his most rewarding experiences offering a safe environment for men to work through their bereavement and to share their life experiences.

The years marched on and then, just when many people Denis’ age would be contemplating retirement, he embarked on yet another challenge by supporting Stéphanie in the start-up and management of Voluntas Commemoration.

He became her administrator and technical support, advisor and most active Funeral Director.

“Providing administrative support especially accounting and bookkeeping for Voluntas has been very interesting and fulfilling for me.” stated Denis always ready to take on new responsibilities.

It has been 14 years since Voluntas began serving the West Island community and 50 years Denis has supported families through their grief. He continues to love what he does, perhaps even more so now since each family served brings a unique meaningful experience.

“Funeral Directors are now more involved than ever directing and presiding over funeral celebrations. They are better trained, more professional. With the move away from strict protocol, they are creative in their offering of personalized services. It is no longer a male dominated industry. I have seen more and more women gradually join the industry.” he says with great pride.

Even technology has played a role in the evolution of the funeral service. Denis could never have imagined that one day, he would be faced with a worldwide pandemic striking fear and sadness in the hearts of so many families.  This historical event forced funeral services to rethink how best they could serve families. The safety of their clients and staff became front and center. Strict sanitary protocols were immediately put into place. Zoom, google meets, and video filming became the new funeral service. Relatives joined together to mourn their loved one through a computer screen.

What started out to be a very structured, somber, and predictable job for Denis evolved into a challenging, heart-warming and rewarding career. A career dedicated to service and empathy. No call has ever been unanswered even if it came at 2:00 am or 11:00 pm.  After 50 years, Denis continues to love what he does never short of ideas for the future.

“I love directing funerals and assisting families. I am proud to provide the best service possible while maintaining decorum. I know I have succeeded if I have been able to reduce a family’s stress.” Denis proudly states.

And, as more and more young people enter the industry, Denis gladly shares his experiences helping them in their career paths.

Denis Marcoux, a grateful man surrounded by a loving wife, four wonderful children, 11 grandchildren and 1 great grandchild. And, if you happen to drop in on Denis on a Saturday night, you’ll find him happily preparing supper for his family, with a cocktail chilling on the counter, prepping food and listening to his favorite music. Denis is a man content.