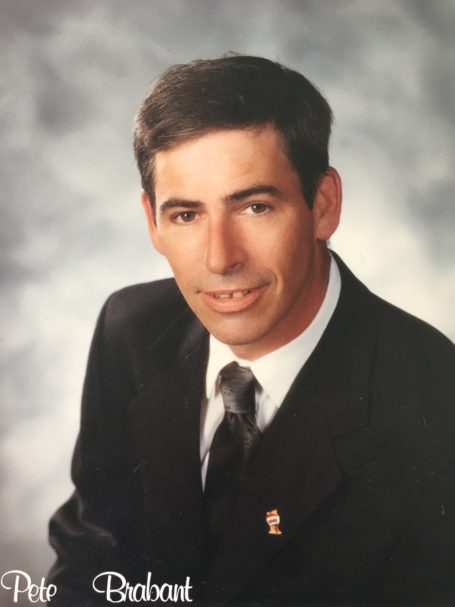 Passed away suddenly at the age of 59 at the Montreal General Hospital on February 15, 2020. Peter is survived by his beloved wife of 20 years, Brigitte, children David and Stephanie, granddaughter Sacha, sister Laureen and family, and special friend Elmo, and many family members and friends to mourn his passing.

At his request, no immediate service will be held.

Peter was born January 20, 1961, in Les Cèdres, Quebec to Georges Brabant and Theresa Phillips.  Peter loved hockey, football, playing cribbage, listening to Pink Floyd, gardening, cooking and most of all, being home with his wife.

He was a kind, sweet, honest soul who set out to accomplish what he wanted to do with his pragmatic, positive, playful and entertaining character. As a young teen he played in the Quebec Pee Wee Tournament against Wayne Gretzky.  Brigitte’s late brother Alex often recalled the days in A Ma Baie gathering around the hockey rink on Station Road with buddies to watch Peter play hockey and  proudly remembers saying “look at Brabant go, the guy was born with wings on his feet”, such a joy to watch him skate”.

Mr. Brabant proudly served in the Canadian Armed Forces Navy for 12 years as Boatswain (deck seaman) based out of Halifax, Nova Scotia and served during Desert Storm among many other tours.  In 2002, he set out to become a commercial real estate agent in Quebec and continued his studies to also become a successful home and building inspector.  Peter’s biggest dream was to own his own building and he accomplished all that he wanted.  He was successful.

A celebration of his life will take place at a later date.

In lieu of flowers, donations to the Canadian Diabetes Association would be appreciated by family.