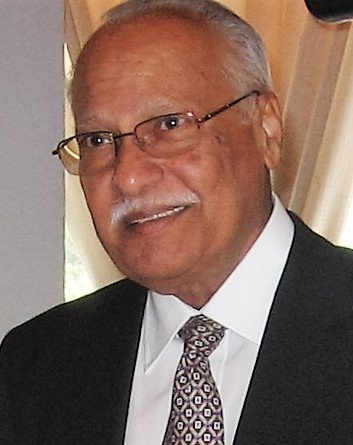 Passed away peacefully surrounded by his family at Vigi-DDO.  Raul was pre-deceased by his parents, Filipe and Annie, his brother Freddy (Rose) and his son Vernon Filipe. He will be sadly missed by his beloved wife of 58 years Phyllis, his children Christopher (Manon), Vanessa (Jean-Pascal); his grandchildren Jason (Amanda), Natasha (Eddy), Samantha, Jean-Alexandre, Julian; his great grandchild Ariana.

A special thank you to Santan & Josephine, Werner & Mary as well as many other family members and friends for their support and prayers.

Prior to immigrating to Canada he had a 17 year tenure with Burmah Shell in India.

While in Canada Raul worked at Velan for over 30 years and retired at the age of 74.  Everyone who knew him can attest of how proud he was of his employment at Velan.

Visitation will take place on Thursday April 14, 2016 at St. Luke’s Church (106A Anselme-Lavigne, DDO, H9A 1N8) from 2 – 5pm and 7 – 9 pm. The funeral will be at the same place on Friday April 15, 2016 at 11am followed by burial at Rideau Memorial Garden. Family would like to thank the staff at 2-West Vigi-DDO and Brigitte and Natalie from Nova West Island for their compassionate care.

In lieu of flowers, donations to Volunteer association Vigi-Sante or to Nova West Island would be appreciated.