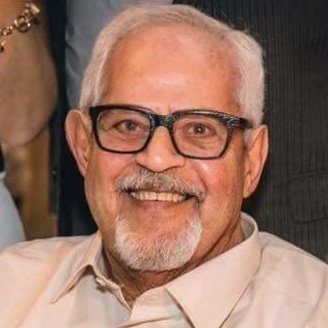 Mishriky Guindi passed away peacefully, surrounded by his family, on Friday, February 23, 2018 in Montreal, Canada, after a short battle with recently diagnosed illness. Mishriky will be greatly missed by his family and friends.  Beloved husband of almost 54 years of his dearest Amal (Loza), loving father of Shahir (Nelly Fanous), Moushira (Adel Boulos), and Sherene (Ramez Rafla), and cherished grandfather of Anthony, Steven, Christian, Tia, Immanuel, Gabriel, Matthew, Marcus, Evangel and Julia-Evangeline.  Predeceased by his parents Julia and Sidarous, and his older sisters Nemat and Ragaa in Egypt, and survived by his youngest sister, Yvonne.

Mishriky was born in Cairo, Egypt in 1937. After marrying Amal in 1964, they chose to immigrate to Canada in 1969. Mishriky had a long, successful and impactful teaching career and was and remains loved by many of those he taught. He had a most pleasant disposition; always cheerful, smiling, and spreading goodwill to those around him. Never holding a grudge, the consummate peacemaker, Mishriky loved life and to make others around him smile. He had an immense sense of humour. A role model for his children and grandchildren, he leaves behind a legacy of love and goodness. Fun, honest, devoted and hardworking. Wise, assertive and very successful in the country he made his home. He gave years of his life to serving worthy causes, such as the Churches he served in and other organizations that served the interests of the exploited in Egypt. He was an inspiration to many!

Before his passing Mishriky had asked that in lieu of flowers, donations instead be made to charities supporting the poor of Egypt, including Bless Canada (www.blesscanada.org) or Coptic Orphans (www.copticorphans.org).