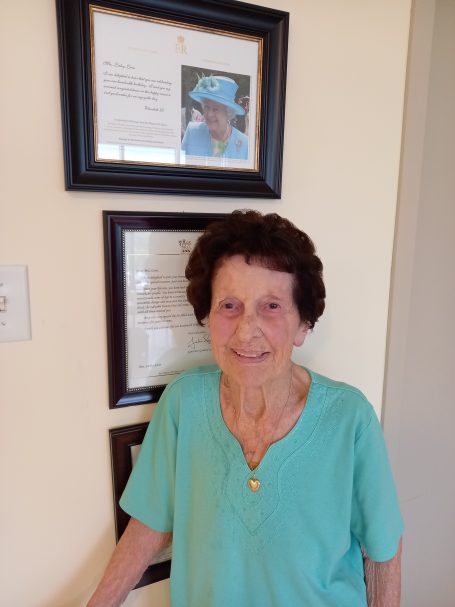 Lesley has lived in the Valois area, now part of the City of Pointe Claire, since the early 1920’s and had a very active and happy life.  As a member of the Valois United Church and from a very young age, she sang in the junior choir and the Mission Band and taught Sunday school for many years.  Lesley was an Explorer Group leader at the church and enjoyed many years with Unit 9 of the United Church Women’s Group.  For many years she sang in the Erskine & American United Church Choir and the Montreal Elgar Choir.  She was active in the Lakeshore Home and School Association while her children were growing up.

Lesley attended and graduated from Weston Private Girl’s School in Westmount, then studied and worked as a dental nurse for several years prior to marriage, taking this profession up again in later years as a dental assistant.  As a young woman, her passion in life was singing and drama.  She attended The Montreal Repertory Theatre, taught drama and elocution in Valois and entertained through the MRT in Montreal and the West Island.

Our Mother met the love of her life, Thomas, as a ‘pen-pal’ while he was overseas with the 1st Canadian Division during the second world war and they fell in love through letters and photos.  A true love story.  They were married when he returned from overseas in 1945 and started their lives together.  Unfortunately, with the tragic and early death of our Father at the age of 52 from cancer the partnership ended, but never the love story.

Lesley loved sports and was active in tennis in her younger years, and bowling and skiing for as long as she was able, which was well into her 70’s.  She loved the ocean and sunshine. Bingo was her passion in later years!

One of her proudest moments in life was reaching the great age of 100 and receiving a congratulatory letter from Queen Elizabeth ll, a lifelong goal.

In lieu of flowers, our Mother has requested to kindly send a donation to the SPCA, an organization very close to her heart, or to the Canadian Cancer Society.

There will be a memorial service held in celebration of her life at the Valois United Church on October 18, 2022 at 11:00.