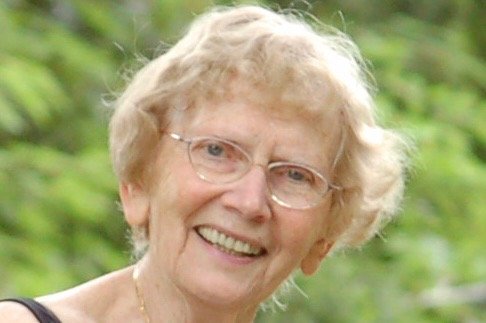 Marjorie grew up in Truro, NS and earned her degree at Acadia University.  While at Acadia she met the love of her life, Ken Matheson and their lifelong friends Anne and Chet Petite and Betty and Norm Eaves. Over the years many stories were shared, tales of Purple Jesus, dancing, laughter and fun.

After Wolfville, Marge and Ken moved on to Boston, where she worked as a Dietician (Deaconess Hospital) and Ken attended MIT.  They married in 1951 and soon after settled in Pointe-Claire, where Marge lived for 62 years.

Marjorie continued as a Dietician at the Douglas Hospital.  After starting a family, she taught at various high schools across Montreal, including Riverdale, Outremont and Malcolm Campbell, influencing several students to pursue a career in commercial cooking.

Mom was an active volunteer in Pointe-Claire, spending many years on the board of Villa St-Louis and volunteering at Stewart Hall.  She was a voracious reader of mystery novels, political science, and history.  She and Ken spent many hours discussing the state of affairs in the world, guessing whodunit or laughing at the antics of the latest comedy novel or show they had watched together.

Her life after retirement was a textbook in how to remain healthy and active through a long happy life.  She was a longtime member of the McGill Learning in Retirement program, which she attended weekly with her good friend Anna.  This involved bus, metro and walking combination from Pointe-Claire to McGill, which she continued until the pandemic clipped her wings well into her 90’s.  She attended fitness classes at the Pointe Claire Aquatic Centre 3-4 times per week.  She was fondly greeted by many in the community who recognized her on her 5 km walks several times a week (rain, snow, or shine) complete with her headset and antenna (she was a great fan of radio).

She embraced her role as matriarch with the same steadiness and commitment she gave to everything in life.  She prepared Sunday night dinners for all family members that were able to attend.  Holiday celebrations were a feast for the eyes (and stomach!).  Once around the table, surrounded by family, listening to Dad’s “basic” stories, her heart was full.

Pre-deceased by her parents Charles and Hazel Ryan, her brother Harold, and her loving husband Kenneth (2013).  She leaves to mourn her children and their partners Patricia and Paul Maguire, Mark and Diana Matheson, Rod and Margaret McLean, as well as her seven grandchildren Kelly (Jesse), Kenny, Mike (Emily), Erin (Alex), Chris (Faidh), Thomas, Jack and one great grandchild Hudson, all of whom made her very proud.  She is also remembered by many cherished nephews and nieces.

Thank you to Kelly Clahane for her friendship in recent years, and the team at Parkland on Eglinton in Toronto, who cared for her during her final months.

A celebration of Marjorie’s life will be held Saturday, November 26th at Voluntas Commemoration, 4695 boul. St-Jean, Dollard-des-Ormeaux, QC from 1 p.m. to 4 p.m.