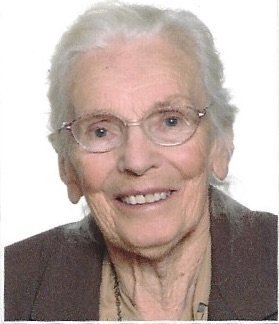 Maria Fisz Prus passed away in her 98th year in Montreal on July 28, 2017. She was predeceased earlier this year by her spouse of 68 years, the architect Victor Prus, and leaves to mourn extended family and friends.

Maria was born in Poland. Her studies in architecture at the Warsaw University of Technology were interrupted by the Second World War. As a member of the Home Army, she participated in the Warsaw Uprising of 1944. After the war, she completed her studies in Belgium and London and worked in the Architects’ Department of the London County Council. Maria and Victor married in England and immigrated to Canada in 1952.

As a gifted architect and landscape architect, Maria was her husband’s partner in many diverse projects after he founded his own firm in 1954. Her signature style was part of significant commissions, including the Palais des Congrès (Montreal), the Grand Théâtre de Québec, Barbados International Airport, Brudenell River Resort (P.E.I.), Rockland Shopping Centre (Montreal), and several branches of Classic Books, as well as private homes.

Maria was named an Honorary Fellow of the American Institute of Architects in 1977, the first woman named to this prestigious title practising outside the United States and not an American citizen. She was named alongside her husband, the first couple to be so named.

Maria delighted in the natural world, in particular her dogs and cats, bird watching, gardening and being in and around water. She was always interested in others and the activities of our world, and memories of her kindness and hospitality will remain with us.

A celebration of Maria’s life will be held at Corpus Christi Roman Catholic Church, 16 Pacific Avenue, Senneville, QC, on Sat. August 26 at 11 a.m., with burial and reception to follow.

The family wishes to thank the staff of Hôpital Sainte-Anne, CLSC, and Health Access for their care.

In lieu of flowers, donations to the Montreal Society for the Prevention of Cruelty to Animals (SPCA) would be appreciated.