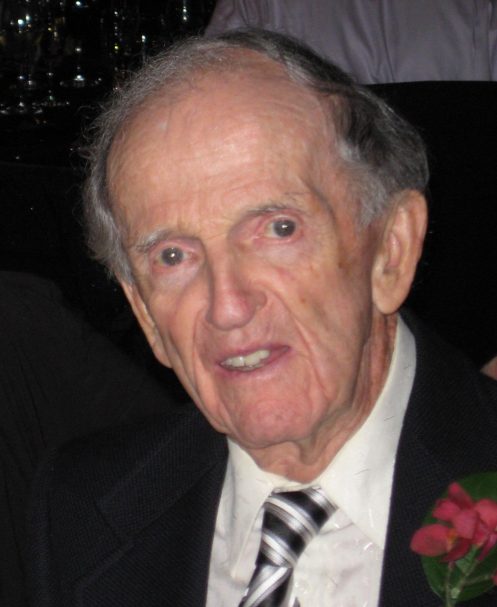 Wilf Quinn died peacefully on March 4th, 2022, only 6 days before his 99th birthday. He is survived by the love of his life Jacqueline (Filion), daughters Karen (Peter Taylor) and Paula. Grandad will be greatly missed by his grandsons, Austin (Christine Matthews), Adam (Tania Costa) and Riley (Jennie Carriere) and great-grandchildren, Isabella, Adrian, Everly, Preston and Sophie.

Born in Prescott, Ontario, in 1923 he was predeceased by his parents, John Bernard Quinn and Mary-Ellen Bradley, three sisters and five brothers.

Wilfred served as a pilot officer in the RCAF during World War II and remained an enthusiast of flight owning two Cesena aircraft while he lived in Montreal. After discharge, he returned to school, graduating in 1950 from Queen’s university with a B. Com degree. He was employed in Montreal for 25 years in a variety of executive positions and retired in 1984 as VP of both Canadian and American divisions of Hughes-Owens Limited.

In their retirement, Wilf and Jackie lived on the 9th fairway of the Cornwall Golf and Country Club. The golf season was year-round for him as they wintered in Florida for 31 years together. He was a committed golfer, enjoying many games with Jackie, Paula, his son-in-law Peter, and grandsons, and only retired his clubs at the end of the season after his 95th birthday. His good health notable as he was still cutting his grass until they sold the house when he was 96. He was also the only one moving into an independent senior’s residence with his treadmill in tow!

His story telling was legendary, as were his “Prescott” jokes. He will be missed, but not forgotten.