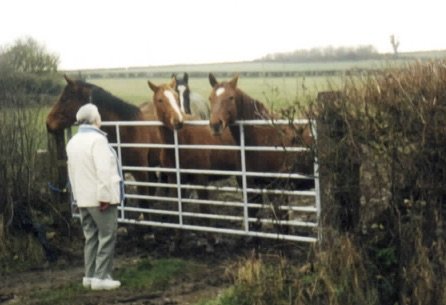 It is with great sadness that I announce the death of my wife of fifty years, Hazel Doreen Smith (née Dorley) in her 93rd year on Monday December 14th 2020 at the Château Westmount in Westmount, Québec. She passed away peacefully and her long stay at the CHLSD was made as comfortably as one could hope with the caring kindness of a highly competent staff, and in particular, the efforts of Julie Gough RN, who came to know her well.

She was born May 3rd 1928 in London, England to parents Francis Patrick Dorley and Doris Emily Mary Humphrey. She is predeceased by her son David and is survived by myself, Peter Henderson Smith, and her son Michael Sayer (Susan Aubertin) and their children Michelle (Nick Henderson), Andrée (Guillaume Flipo), Danielle (Dan Pearse), Nicole (Jon Maggio)and Marc (Judith Nadon-Maltais) this total includes in addition seven great grandchildren, Chloé, Remi,Alexis,Mélodie (Andrée),Deanna and Michael (Nicole) and Mia (Marc).  Sister in law of Janet C. Cole (late Manning Cole) and Charlotte Smith (Ev Smith).  She was predeceased by her great friend Yettive Crestohl and other good friends Archie Campbell of Saskatoon and Peggy and Bob Quigley of Summerstown,Ontario.

She was immensely proud of her English roots, of her father’s service in the Grenadier Guards in WW2, her mother’s own contribution to the war effort and her own efforts after the war’s end which led to the acquisition of a house for her family. Hard work, consistency and attention to detail matters, as does independence of mind. Both children and animals benefit greatly from this approach and it was her trademark. She became an authority in the Canadian art scene and was closely involved with same at Expo 67, in the end becoming the only person who could persuade one A.Y. Jackson to participate at all! She co-founded the West End Art Gallery in the early sixties with the late Leo Millman, and her views on the subject were widely appreciated. She saw to it that the family summer home on Dorval Island became a special happy place for all the grandchildren in their formative years.

She visited England regularly and became great friends with many in Somerset, especially those associated with the Art Tent at the Royal Bath & West of England show at Shepton Mallet, as well as Sheila and Michael Sage of Clutton, Norman and the late Joyce Matthews of Peasedown St. John, John van Bergen – Henegouwen and his wife, the late Christine of Harter’s Hill, the late Winifred Head, Ed Bridges, Keith and Evelyn Cheasley of Midsomer Norton and the late Cecile Crombeke of Burnham on Sea and the late Dom Benet Innes of Downside.

She was lovely company, a formidable companion and will be hugely missed. A memorial service will be held at a later date.