The Secret by Lynn Brown-Poole

The old woman is sitting peacefully in her recliner. She looks regal with her coifed chignon and svelte figure dressed in simple elegance. She pretends to be watching TV, but she is deep in her thoughts, her memories, tucked far away in the past, but still sharp and clear. It is New Year’s Day, Calais, France, 1942.

The Germans have occupied the tiny port since 1940. Tonight, the soldiers are celebrating the New Year. They believe that the war will soon be over. They’ll be returning home to their loved ones. Beer is flowing, songs are being sung. There is much to celebrate.

Jacqueline has just finished her shift working in the mess hall. Since the fifteen-year-old is no longer permitted to attend school, she works to help support her mother and siblings. She is riding her bicycle home, the pedals are stiff, the bike is rusted. As she passes City Hall with its clock tower suspended in time, no longer in motion, she hears the dreaded words, “Halt!”. She breaks hard and nearly falls.

“Papers!” he declares in German. He is watching her carefully as she fumbles to retrieve her papers.

“Why are you out past curfew?” he asks in broken French, less aggressively.

“I work at the mess hall.” says Jacqueline. She produces her papers for inspection, hands shaking.

“Oh, I’ve seen you. You’re the girl who clears the tables.” he says in a kinder tone.

“Yes, that’s me.” she says as she balances her bicycle and waits for the soldier to return her papers.

“I have noticed. You work very hard. Are you on your way home now?” he inquires.

Jacqueline is uneasy. She has been warned by her mother, almost daily, not to speak to the German soldiers.

“Yes, my mother is waiting for me.” she nervously replies.

“Well, I’d better not keep you.” he says. “Be careful,” he looks down at her papers “Jacqueline”. He says her name as if locking it into his memory.  “Go straight home. It’s not safe to be out after curfew.”

“Thank you, sir” she says as she gets back on her bicycle and pedals home as fast as possible.

As she enters the house, she hears her mother cry out. “You’re late! Do you want to make me sick with worry!”

Jacqueline climbs the stairs to her room and closes the door.  She throws herself onto her bed. She is rattled for having been stopped but at the same time she keeps thinking about the soldier who stopped her. He had dreamy blue eyes and blond hair. He was handsome. And he was nice to her.

She’s confused. Why does her mother keep telling her not to talk to the Germans? They are always so polite. As she pulls the covers tight under her chin, she falls asleep dreaming of the handsome German soldier who recognized her.

It has been a cold difficult winter as one day runs into the next. The routine never changes. Jacqueline works six days a week at the mess hall. She keeps her head down, she obeys her mother and never speaks to the soldiers.

In April, the warm sea air blows through Calais announcing the arrival of Spring. Jacqueline feels the optimism of a new season. Riding her bike about town doing errands for her mother, she hears a boy call out.

She is startled. She almost falls off her bike. The boy is already at her side holding on to her bike, helping her steady herself.

“Do you remember me?” he asks enthusiastically. “I stopped you on New Year’s morning. You know, after the celebrations in the mess hall.”

Of course, she remembered him. She has thought of no other boy since that night. She must play coy.

“Ummm, no but yes I do remember being stopped” she replies.

“Well, I have thought of no one since.” He is so transparent. “I must confess, I look for you every time I’m in the mess hall. I have seen you a few times, but I don’t dare approach.”

She doesn’t know what to say, how to act.

“I hoped one day I would see you on the streets. I have a small gift for you.” he says as he extends his hand. It is a square of chocolate wrapped in brown paper.

“Please, go ahead, accept it. It’s just a little treat.”

She hesitates but the lure of chocolate is too strong to resist. How long has it been since she’s tasted chocolate, one, no two years? She extends her hand and accepts the chocolate.

“Thank you.” she whispers.

“Well, I have to go.” He turns and as he runs off, he looks over his shoulder and happily hollers, “I’m Klaus, by the way. I hope we meet again, Jacqueline.”

Jacqueline is stunned. Who is this boy? Why does he remember me? She hides the chocolate in her pocket as she relishes the thought of eating chocolate for the rest of the day. In fact, it takes her a week to finish the square as she permits herself only one bite each night.

The occasional encounters continue between Jacqueline and Klaus. They are always short, quick conversations but enough to carry the two until their next meeting.

Eventually, they begin to plan when and where they will next meet. It is usually out past the city limits in the farmers’ fields. It is dangerous but they are careful. They tell no one.

They learn that they have so much in common. They have both been raised in port cities, they love the sea. Each have two siblings, a sister and a brother. Their mothers are strong and brave. They have big dreams for their futures; Jacqueline a fashion model in Paris, Klaus a mechanic working for Daimler-Benz. She teaches him French while he teaches her German.

Spring turns to summer and the fields are filled with corn flowers as blue as Klaus’s eyes. Jacqueline can think of nothing else. She is in love. Klaus cannot believe that such a beautiful girl could love him. He is the luckiest boy in the world.

But the war rages on. The bombs start to fall directly on Calais. The British are growing in strength. They must get the Germans out of Calais since it is strategically too close to Dover.

The chaos of war is everywhere. It is dangerous to be out on the streets even during the day. Jacqueline and Klaus manage to exchange love notes hiding them behind a loose brick in the wall outside the mess hall.

It is not long before the cold damp months of winter brings even more hardship, but Jacqueline is buoyed by the regular flow of messages from Klaus.

One night as she leaves work, she retrieves another note. Klaus has arranged a secret meeting for that very evening. She doesn’t hesitate. She quickly weaves her way through the streets to meet Klaus in a bombed-out building, an old bookstore. She gingerly steps over bricks and plaster, finds an opening and enters.

He is there, waiting in the dark. They embrace. They cannot let go of each other. They kiss. There is a blanket on the floor. They sit down. He is gentle as he helps her remove her blouse. She unbuttons his uniform jacket. They undress and lie down together. Neither one has ever done this before. They fumble. Their hands move slowly, exploring each other’s bodies. Cautiously, tenderly he lowers his body onto hers. They make love beneath the broken light of the full moon peeping through the ravaged roof.

They lie together holding hands, no words spoken between them. But the magic of the moment does not linger as it is broken by the shrill screech of the air raid sirens. They jump up, dress quickly, sneak out of the building onto the street and kiss.

It is the last time Jacqueline will see Klaus. There is never another note. She learns from the talk in the mess hall that his platoon has moved out.

Nine months later, Jacqueline barely survives an air raid that blows out half the hospital where she lays with her newborn son, Gérard.

The caregiver enters the old woman’s room and arouses her from her thoughts. “Mme. Jacqueline, you have a visitor today.” she says as she escorts a handsome gentleman into the room. Jacqueline opens her eyes and sees him. Such a warm smile and eyes as blue as corn flowers, his hair blond.

“Oh, Klaus, I knew you would return.” Her eyes sparkle. 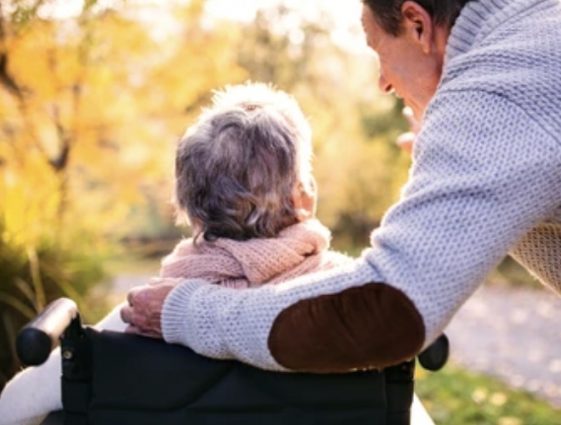