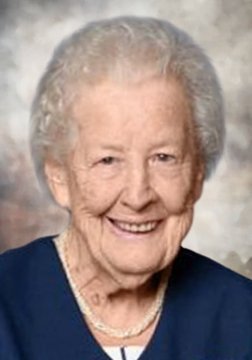 It is with great sadness that we announce the death of Marion Finn (nee Empey). She is survived by her children, Ronald (Heather), Barbara (Jacques), Judith (John), Allan (Yulia), Kathryn (Wilfried), Beverley (Regent), Thomas (Nathalie), Robert (Sheila), twenty-two grandchildren, twenty great-grandchildren and one great great-grandson. Marion was pre-deceased by her husband Thomas, son Richard and grandson Jeremy, parents as well as five brothers and three sisters, she has one surviving brother Walter. Marion was a loving mother, grandmother, great-grandmother and great great-grandmother who had strong faith in God, she took pride in taking care of both her family and many friends.  She was our rock and will be greatly missed. We would like to give special thanks to her grand-daughter Laurie, friend Carol along with our sister Barbara who were all paramount in seeing to her care during her time of need. Thanks goes out to her Church family Pastor Fred his wife Nancy and fellow church members for their support during this trying time. She fought right up until the end; her struggle and pain has come to an end, may she rest in peace.

A memorial service will be held at People’s Church, 370 – 5th Avenue, Deux-Montagnes on Saturday June 1st at 3:00 p.m., visiting from 2 -3 p.m., reception to follow downstairs after the service. In memoriam, those who wish are invited to contribute to the People’s Church Deux-Montagnes children’s summer program of which Marion was a strong supporter.