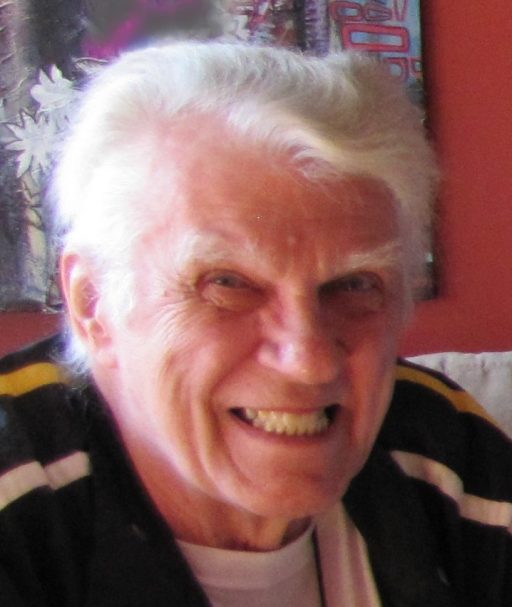 Gerry died at the Lakeshore General Hospital on Thursday, May 7, 2020, but gave no indication during the day Tuesday that he would need to be taken by ambulance that night. He was the beloved husband of Jann (Robinson), who was deeply saddened not to be permitted to go with him due to the Covid restrictions. A very kind nurse held his hand and passed on Jann’s love and goodbyes in her stead, and he slipped away shortly after 1 a.m.

He was the brother of Rosemary (Gord Best) of Toronto, brother-in-law of Dale Robinson (Linda), father of Jeremy who predeceased him and Graeme (Julie Brown). Stepfather of Alison Campbell (Warren Stricker) and Sombra (Stuart Wilson) and uncle of John Mitchele and Richard Mitchele, uncle by marriage of James Lee Robinson (Michelle) and Michael ‘Basil Moon’ Robinson.

Also left to mourn, grandsons Darren (Erin, and their 5 children), and Trevor Clarke who are sons of Candice Clarke, grandchildren by marriage Trent Wilson (Natali and their 4 children), Myles Wilson (Emily and their 2 daughters), Rourke Wilson (Savanaha and their daughter), Janney Wilson, Asher Wilson, Elias Wilson and Ronen Wilson.

Gerry taught at John Abbott College in the department of Humanities/Philosophy/Religion from 1971-2005. He played many roles: he was usually a co-chair, a founder of the Liberal Arts program, and always the anchor of the department. He was loved and respected by generations of students and colleagues. Gerry worked for many years in architecture in St. John, NB but his heart wasn’t in it. He realized that what would fulfill him was to become a teacher and so, still in architecture, he transferred to Montreal in order to study philosophy and mathematics at Sir George Williams (Concordia). When the Province of Quebec was looking for teachers in their new CEGEP system he took the opportunity to join John Abbott College. He lived with gusto and boundless curiosity. His courses ranged widely, from the history of Philosophy, to Math and Logic for Liberal Arts students, and Oriental Philosophy. He loved teaching and John Abbott, Kant, Siamese cats, Go, Zen Buddhism, jazz, playing the saxophone and then Baroque recorder, computers and electronics, travel, TV, and hanging out. He loved cars and motorcycles, devoting his twenties and early thirties to car rallies and motorcycle racing.

He was born in northern Alberta and raised in Winnipeg by parents Clement LaValley and Frances (Trueman). As well as being kind and honorable, he was a giant of a man. All who knew him were graced by the privilege.

Special thanks go out to the doctors, nurses and pharmacists who provided so much care in his final years. To honour Gerry’s life, donations to the Lakeshore Hospital Foundation (Pointe-Claire, QC) would be appreciated by family.